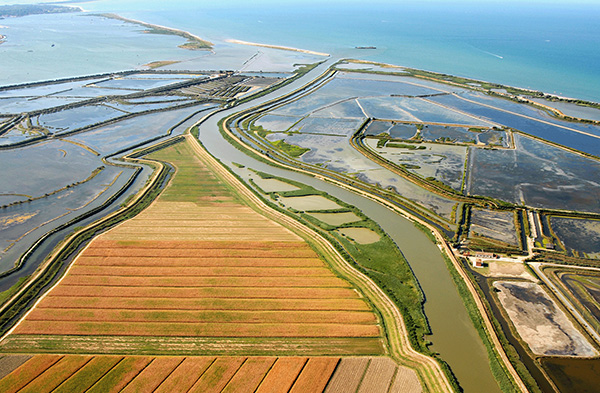 Silence prevails over the roads of the lower course of the Po, enveloping travellers, pushing them to continue exploring the area. A skilful click of a camera will permanently capture the sky, water and silence. The great river lurks behind every corner.

Following the small roads running alongside the Nuova Romea feels like going on a never-ending journey. The countryside is flat, but full of colours and crops. There are rice fields where you would least expect them and herons and egrets, constantly on the look-out for small amphibians, show off their beauty. Sand hints that the sea is not far away. In the 1960s the area was freed from the isolation imposed by the delta: the creation of the Nuova Romea motorway made it easier to access the coast, which is shaped by the waters of both the sea and the river. The motorway is of historic importance as it reaches the delta area, which had previously forced roads to turn inland. The Nuova Romea was constructed alongside the ancient Rome road Via Popilia and Medieval road Via Romea; pilgrims travelling to or from Rome would either pass through the area or stop here to rest.

When considering the disappearance of the Etruscan settlements of Adria in the North and Spina in the south, it is easy to understand how frequent flooding, the phenomenon of bradyseism and the historic lack of roads shaped the economic life of populations.

An effective battle against regular flooding and an attempt to replant trees started in the XVI century, spearheaded by the Este family. Important drainage works led to the construction of the Abate and Volano drains.

The new water-land balance did not hold: the Venetian lagoon risked silting up and the course of Mincio River had been compromised.

In 1599 the Venetian Republic stopped the bank at Porto Viro, changing the course of the Po which now flowed to the south into Goro cove. The Venetian lagoon was saved. The drainage systems were silted up and the sea flooded Volano port.

The cities of Ferrara, Venice and Ravenna fought over the salt trade. Salt was extracted from the Comacchio salt mine until 1984. Nowadays the area is of great natural importance: resident marsh birds nest and pink flamingos stop here. Visitors are welcome.

At the end of the 19th century work started on the Great Ferrarese Drains with the construction of the Codigoro drainage plant, which is still in use today. Work finished just before the outbreak of the First World War. In this region, history has been shaped by both the people who lived and live here and natural phenomena.

To safeguard its heritage, in 1988 the region of Emilia Romagna founded the Parco del Po. It is made up of six “stations”, taking visitors from Veneto to Romagna. Discover the area on the countless cycle paths, walking trails and boat tours; many museums, small and large, tell the history of the region.