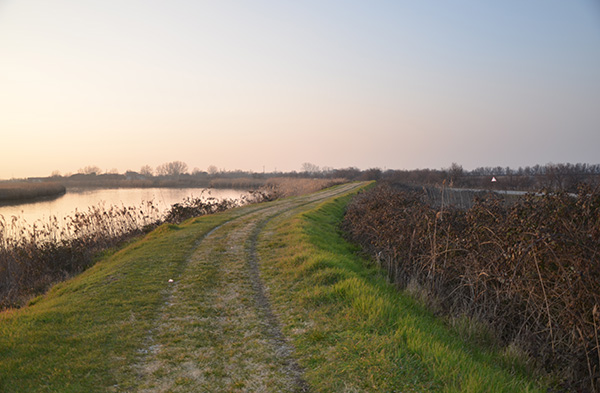 Comacchio, "capital" of the Delta

The origins of this beautiful town are not known, but it is thought to date from the beginnings of Christianity. It is known as “little Venice”.

Archaeological excavations in the area suggest that Comacchio was settled by inhabitants from the nearby Etruscan settlement of Spina, which disappeared in the 3rd century BC.

The first reliable document about the existence of the town dates from distant 715 or 730 AD: it records the taxes Comacchio owed to the Lombards for the transportation and sale of salt. Its salt mines and fishing basins (valli) made the town an object of contention to Ferrara, Venice and Ravenna. After being a free comune, the town passed to the hands of the Este and then to the Papal States. The latter gave the town its present appearance.

Comacchio is a lagoon town, rising up out of 13 islands, joined by countless bridges. The most well-known bridge is Trepponti; dating from the 17th century, its beauty is indisputable. It consists of 5 large arches bridging the canals and supported by adjoining pillars. In the summer the monument becomes a magnificent stage for fashion shows. At Ferragosto, the centre of the town hosts a preview of the Buskers Festival.

Walking alongside S.Pietro, Rosario and Carmine canals you will see the countless sacred images decorating the fronts of the fishermen’s houses. People from Comacchio, with their characteristic accent, have unique somatic features making the origins of the population even more mysterious.

The cathedral dedicated to S.Cassiano dates from 708. It was demolished in the mid-17th century and rebuilt in the 1700s. The belfry dates from 1740.

The Roman Ship Museum, housed at Palazzo Bellini and open all year round, displays the hull of a Roman ship discovered in 1981 in Comacchio, containing everyday objects and its cargo. Fishermen take tourists for a trip along the canal on typical flat-based boats.

Manifattura dei Marinati is a visitor centre about the history of local life. Each autumn in the “fire hall” visitors can watch the process of marinating fish. Videos are also screened.

The local food tradition is sophisticated: old traditions are captured and condensed in unique tasting dishes. Polenta always accompanies eel, regardless of the season; fish from the Adriatic is on the table; and the famous cappellacci filled with pumpkin are one of life’s pleasures.

When Renée of France came to the area to marry Ercole II, she brought with her the Burgundy grape variety Cote d'Or. The wine resulting from the grapes grown in the sandy land has achieved D.O.C status. Vegetables are an important ingredient in many dishes, such as traditional “eel with savoy cabbage”.

The people of Comacchio’s reassuring “taste” for the art of getting by is also represented in their crafts: beautiful objects made out of braided straw are for sale.

That Maria Ilva Biolcati, our beloved Milva, was born in Goro cannot be a coincidence.

The valleys, formed after significant drainage work, is an area of stretches of either permanent or temporary water. The area has huge naturalistic and anthropological value. In 1999 Unesco declared the Delta del Po area a Patrimony of Humanity.

The Ferrarese area of valleys extends from the northern border of the Veneto region towards the province of Ravenna in the south.

The dune cordons are a tangible sign of the coast’s movement over the centuries.

Goro Cove is situated between the river mouths of the Po di Volano and the Po di Goro. It is positioned next to Mesola wood and separated from the sea by the Scanno di Goro, a dune cordon that is still moving.

The attractive Gorino lighthouse is located in its homonymous valley, which is today an oasis for the protection of fauna. The presence of herons, bitterns, coots and water-hen, alongside numerous varieties of fish, make these valleys truly unique.

Close to Lido di Volano jewels such as Porticino Valley and the Bertuzzi valleys reveal themselves. Outcrops from old dunes are a reminder of the changing coast line.

Lago delle Nazioni (formerly Volano valley) is an artificial stretch of water, created by digging up the former Volano valley. It is a popular spot in the summer for sailing.

Visit the valleys area and the neighbouring regions Veneto and Romagna in safety by using the countless cycle paths. Destra Po, a 120 km route, offer an especially interesting and attractive trip. Starting from Goro, it passes through Ferrara to reach Stellata at the Western edge of the province. Here you can visit Rocca Possente, built on the banks of the river in 1000.

The drainage works reduced the overall size of the Comacchio Valley area. Despite this, it remains the most important stretch of the coast.

Dune cordons, small hills and artificial banks hold stretches of fresh or brackish water. This environment favours fish and bird life as well as diverse forms of vegetation. The marsh harrier and the curlew can be seen here.

The Etruscan dune cordons at Boscoforte are spectacular. Boscoforte is a sort of peninsula, full of rushes and tamarisk, stretching 6 km north from the province of Ravenna. Countless birds from the valley come to the area for the winter: shelduck couples mate here, making use of the wild rabbit’s burrows.

The most interesting inland wetlands are Campotto and Vallesanta detention basins. They are the last remaining valleys dating from the Middle Ages and are located where the torrents from Idice and Sillaro rivers meet the Reno river.

The basins collect water from the rivers. The water is then used for irrigation or poured back into the rivers.

You may get the chance to see a huge heronry, where herons make their nests amongst willow, elm and ash branches.

Anse vallive di Ostellato were also saved by the drainage works. The fresh waters of its valleys are a frequent home to stilt-birds and birds of prey. The area is fitted out for fishing, picnicking, bird watching and guided excursions. Bike hire is also available.

In Ostellato the museum of the local area demonstrates the evolution of both the land and man in the Po Plain. Trips in a motorboat are available.

During your visit, your attention will certainly be drawn to the fishing houses. They were built from reeds and other weeds from the marshland up until a relatively recent past. The houses were lived in by fishermen who would who use them for fishing, or they served as look-out posts for guards whose job was to prevent poor fiocinini (fish poachers using a gig) from fishing in the area.

Stories of conflicts between fiocinini and guards are collected in local history books. There are also stories about “lavorieri”, original arrow-shaped structures, enabling fishermen to select the exact eel they wanted to catch. They were originally made out of reeds; nowadays cement and metal are preferred.

The splendid environment of the valli has been used as the stage set for important films, such as The River Girl by Mario Soldati, People of the Po Fish basin by Michelangelo Antonioni and And Agnes Chose to Die by Giuliano Montaldo to mention but a few.