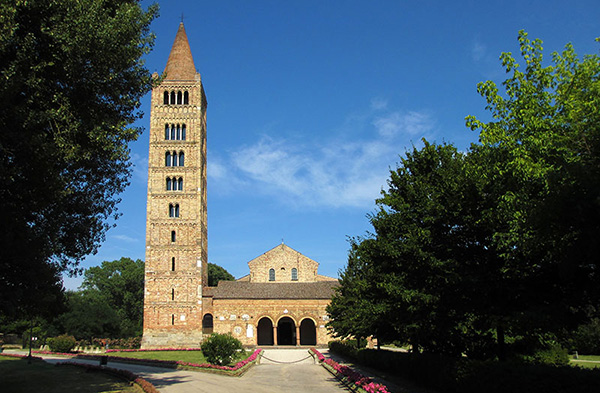 The ancient Roman road via Popilia (which ran more or less parallel to the Medieval road via Romea) took pilgrims from the north to the south, along the Adriatic, to Rome.

This route, as well as the important Volano and Primaro waterways, made Pomposa an important resting point.

In the VI - VII century the Benedictines settled on Pomposiana Island. The island is shaped by the Goro Po, the Volano Po and the sea. By the Middle Ages monasteries were self-sufficient community-villages and monks were committed to work, prayer and penitence. The waters and the strength of nature forced them to continually drain the land by digging canals and building drainage works.

In 1000, Pomposa Abbey had vast fertile land, fishing basins and salt mines. Abbot Guido degli Strambati (who was from Ravenna) governed the abbey from the beginning of 1000 for over 40 years. This was the start of a prosperous period for the abbey and the monastic community that would last until the 1300s. It was in the monastery that the abbot translated sounds into musical notes.

The Abbey became a spiritual centre and hosted guests such as Bonifacio di Canossa, Mathilde’s father, Guido d'Arezzo, the emperor Enrico III and Dante Alighieri, who blighted with malaria died not long after his stay in Ravenna. More recently Pope John Paul II visited the abbey.

What followed was a difficult period for the monks. In the mid-14th century huge floods changed the entire geography of the delta and plague and famine ensued. As a result, the island was returned to wildlife.

In the 16th the Este family started major drainage works, but the new land-water balance did not hold. In 1670 the final remaining monks left the Abbey and the monastery was closed following political issues. The monastery remained in its abandoned stated for several centuries, until 1900, when it was renovated.

Today as you head south along the Nuova Romea (which when it opened at the beginning of the 1960s freed the communities and land from its isolation), you can admire a large well-kept green space that houses and perfectly frames the beauty of the imposing Pomposa Abbey complex. The Abbey includes:

Some images of Pomposa Abbey