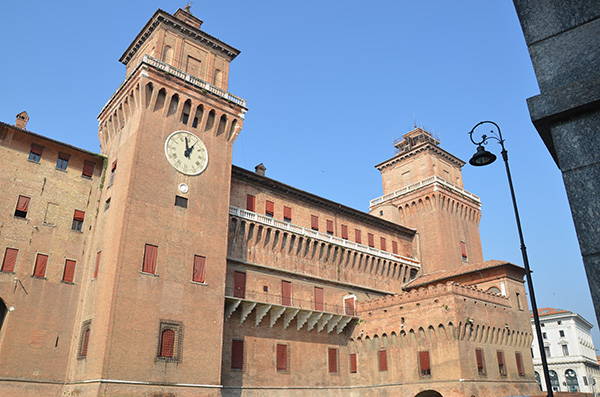 Things to see in and around Ferrara

To see in Ferrara

The castle is elegant and imposing. Its oldest part, the Lion’s Tower, dates from the 1200s. Marquis Nicolò I d'Este later added to the structure and built drawbridges to defend himself against the assaults of the overtaxed population.

The internal courtyard, reached by drawbridge, and the underground boatyards are sensational. In the cells Ugo d'Este, the son of Duke Nicolò III, and his lover Parisina Malatesta, the young wife of the Duke, were decapitated.

It is easy to get to the castle using public or private transport. Guided tours are available throughout the year. On New Year’s Eve a spectacular fireworks display “inflames” the castle in a blaze of colour and sound. In the summer the “Ferrara under the Stars” music festival brightens up the city.

The white monument to Girolamo Savonarola dominates the homonymous piazza. From the piazza you can see the 15th century Via Coperta whose arcades create a sheltered walkway between the castle and Palazzo Ducale.

The Medieval Volto del Cavallo, with statues of Borso d'Este and Nicolò III, leads to Piazzetta Municipale. A covered grand staircase takes you into the 3rd century building where the Este family lived until they left the city. Be sure not to miss the Duchesses’ Rooms.

The Duomo, with its Romanesque-Gothic façade and handsome portal, dominates Piazza Cattedrale. The area is buzzing with citizens and students who swarm the adjoining shopping streets. Off the left side of the piazza is a small street, where the 15th century “Cucchiulin”, a former inn, is located. On the right side of the piazza is the “Loggia dei Merciai”.

If you look around you will see the Medieval Clock Tower and what used to be San Romano Church. The former church’s small cloister now houses the Duomo Museum.

Sixteenth century masterpieces saved from churches badly damaged in the 2012 earthquake are on display in the frescoed rooms of Palazzo del Seminario.

Discover the Jewish quarter and the Medieval part of the city in your own time on foot or by bicycle. Bicycles can be hired from several points in the centre of the city. In the Papal period, Jews living in Ferrara were forced to live in the quarter. The synagogue is easy to spot through the shop windows. Jews have been living in the city since 1200. The first National Museum of Italian Judaism and the Shoah (MEIS) was recently established in Ferrara in what used to be the city’s central jail.

Water has prompted research in the Medieval part of the city. The Po di Primaro used to flow through what is now Via Ripagrande. The founders of the city first settled here. Via delle Volte doesn’t fail to deliver what its name suggests: the 1200-1300 “vaults” [volte] served as passages between the rich palaces and more modest households. It is said that Lucrezia Borgia and other members of the court used to visit their lovers in this district.

The spacious Renaissance street Venti Settembre was created after the River Po was filled in. Here you can see Palazzo di Ludovico il Moro, with its beautiful courtyard and Italian gardens. Don’t miss the renovated and excellently curated Archaeological Museum of Spina, housed in the building’s walls.

In the surrounding area is the Monastery of San Antonio in Polesine (Beatrice d'Este’s final resting place), a clock dating from the 1400s which still works and a fantastic Japanese cherry tree whose flowers you can enjoy in the spring.

At Palazzo Schifanoia, a 14th century folly built by the Este family, the Dukes would organise events to “avoid boredom”. The frescoes in the Hall of the Months will enchant visitors. Not far away is the Borgo di S.Giorgio. Its church, the first cathedral in Ferrara, was built on a small island in the 7th century and has a belfry reminiscent of a lighthouse.

Corso Ercole I d'Este starts from the castle and leads to the Herculean Addition. The Duke built this district to make the city larger. The harmony with which the two parts of the city were joined made Ferrara the “first modern city in Europe”.

The marvellous street Corso Ercole I d'Este, where stylish Arnoldo Foà once lived, leads to the mura degli Angeli (city walls). Cesare d'Este left the city from here, leaving Ferrara under the control of Clemente VIII.

As you walk down the street you will reach the spectacular quadrivio degli Angeli (a crossroads), which is flanked by luxurious buildings:

Not far from the oval shaped Piazza Ariostea is a sizeable green space. A ring, reached by a flight of steps, marks the perimeter. Every spring the Ferrara Palio takes place here.

Opposite the Piazza, the small street via delle Erbe leads to the Jewish Cemetery, which backs onto the city walls. Not far away is the 15th century monumental complex, the Certosa. The Torrione di San Giovanni, built to defend one of the city gates, also dates from the 15th century. Many people go jogging around the city walls and jazz concerts are held in its internal hall.

Walking from the San Giovanni ramparts below the city walls, you will arrive at attractive Corso della Giovecca. This street leads to Palazzina Marfisa d'Este, with its beautiful Italian gardens, loggia and orange grove; here Torquato Tasso directed and performed Aminta. Not far away is a plaque commemorating the time he spent at palazzo S. Anna to recover from his frequent bouts of madness.

Ferrara is a beautiful city. It is always beautiful, each season giving it a unique aura that makes it stand out from other Italian cities. The plots and the extravagance of the Este family are apparent throughout the city, just like the water of the great river, which reveals itself even though it is not there.

There is a strong film tradition in the city. Many superb works were filmed in Ferrara, including the early 20th century popular works Obsession, It Happened in ’43 and Bitter Love and Renata by Luchino Visconti, The Gold Rimmed Glasses by Giuliano Montaldo, The Garden of the Finzi Continis by Vittorio de Sica and The Cry and Beyond the Clouds by Michelangelo Antonioni.

Ferrara is a vibrant city. Each August the Ferrara Buskers Festival, the international street musician’s festival, brings the central streets to life.

Each autumn the International Festival of Journalism draws big names to the city.

Our food is excellent, our bread is great to eat with bread and our cappelletti pasta in broth and succulent salama da sugo, celebrated by Mario Soldati in his famous documentary, are extraordinary.

Giorgio Bassani Park, next to the city walls.

Starting at via Ercole I d'Este and climbing onto the city walls, you will reach Giorgio Bassani park. In the past the park was used exclusively by the Este family for hunting. Nowadays its green space of some 1,200 hectares is open to the public. The park has sheltered cycle and foot paths and hosts open-air events such as the Kite Festival in April and the Balloons Festival at the end of September. A convenient cycle path leads to the River Po in the residential Francolino district.

This ancient island river is an important natural oasis. It is situated on the northern edge of Bassani park, close to the Francolino district (easily accessible by cycle path). The island is open to visitors in the spring and summer. Book your place at any LIPU (Italian League for the Protection of Birds) office.

This “garden” is a wildlife rescue centre. Situated at the foot of the city walls, it is easily accessible for people with a disability. The garden is open on Saturday mornings and by reservation (made at any LIPU office).

The Delizia Estense di Fossadalbero, built in 1424, is situated close to the River Po, 14 kilometres from Ferrara. The handsome castle decorated with Guelph merlons was a folly used for hunting and holidaying by the Este family. It is said that love blossomed between Ugo, the son of Nicolò, and Parisina in the castle.

The Delizia Estense del Verginese is located 19 kilometres from Ferrara, in the countryside surrounding Gambulaga. Alfonso I gave the castle as a gift to his partner Laura Dianati, who wanted to establish her own court here. The delizia is defined by four towers complete with merlons. Nowadays it houses a museum, open all year round, displaying Roman archaeological finds excavated close to Delizia in 2002.

The rich and ornate Delizia Estense di Belriguardo is the Versailles of the Este family. It is situated 17 kilometres from Ferrara in the countryside surrounding Voghiera. Nicolò III built the castle where he would host heads of state, princes and popes. Nowadays it houses the Civic Museum of Belriguardo, which has sections on archaeology, the Renaissance and modern art. The museum can be enjoyed by people who are visually impaired.