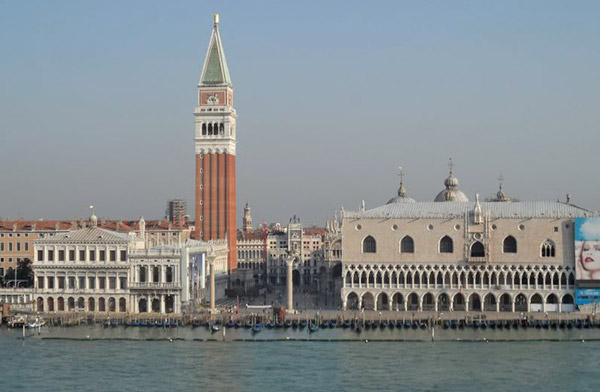 The Nuova Romea road is as strategic today as it was in the past; journeying north, the road takes travellers to the enchantment that is Venice.

As is well known, Venice is totally unique. The handsome palaces are reflected in the canals, which act as the city’s roads.

Venice was created from water and the history of the region recalls it well. The coast line was changed, canals and rivers were redirected creating new and evocative spaces. Land was forced up out of the water, providing a space for marvellous palaces, campi and campielli (squares and little squares), where it is not uncommon to see wells and the remains of social spaces. The narrow streets are known as calli.

Despite the impressive buildings constructed over the centuries, the balance between water and land remains fragile. Rising out of countless islands, Venice was inhabited even before the Lombards came to the Paduan Plain. The patriarchs of Aquileia ruled the plain until 692, on behalf of the exarchate of Ravenna; it then became independent, establishing itself as a “dogate”.

The city of “Venetia” was established after Carlo Magno’s attempt to conquer the land in 810. Venice started to expand its merchant trade into the Adriatic, in competition with the Dalmatians. At the beginning of 1000, under the guidance of doge Orselo II, the city succeeded in imposing its rule. In the XI and XII centuries it successfully curbed the Norman advance from the south. In the first half of the XII century, the Council of Wise Men favoured establishing the comune of “Veneciarum”, which would be supported by powerful merchant families.

The first holdings Venice took in the Mediterranean (Zara, merchant warehouses in Constantinople and Izmir in Turkey) led to conflict with the Republic of Genoa. Venice suffered defeats and had political crises, but the city managed to keep hold of its commercial and maritime rule. Despite the plague that hit in 1347, the consequent drop in population and political crises, Venice achieved victory in the 1378-1381 War of Chioggia against the alliance of the king of Hungary, Florence and Genoa. Venice expanded inland until Adda, where it was stopped by the Milanese.

Venice’s land extended from Bergamo to Istria, Ravenna and Puglia. It had to retreat from the latter in 1508. With the conquest of America and the advance of the Ottomans in the Mediterranean, Venice’s commercial power started to dwindle. It lost Cyprus, Candia and Famagusta to Turkey. By 1796 the city had declined to such an extent that it had been defeated by Napoleon and was under occupation. The French military leader surrendered the city to the Austrian Empire in 1797 in the Treaty of Campoformio. In 1805 Venice was returned to the French and made part of the Kingdom of Italy. In 1815 the Congress of Vienna brought the city once again back to Hapsburg rule.

Hostility towards the Vienna government came to a head with the uprising of 1848. The Austrians were expelled and the Republic of San Marco was declared. During the Third War of Independence, in 1866, the city became part of the Kingdom of Italy.

Travellers can marvel at the splendour of monumental Piazza San Marco (the only space in the city called a piazza). The Basilica di San Marco, constructed in 828 in Romanesque-Byzantine and Gothic styles, has been a cathedral since 1807 and office of the Patriarch. The cathedral houses San Marco’s relics, which were stolen from Alessandria in Egypt by Venetian merchants. Inside the building you can see XIII century golden mosaics and splendid objects pillaged from Constantinople during the IV crusade ordered by Pope Innocent III.

For its height, the base of the Basilica is very wide: this was the only way the sandy ground could hold the weight of the building. The main doors were inspired by Arab and Byzantine styles. Pairs of bronze horses stand on the balcony; stolen from the hippodrome in Constantinople, they replace the originals, which are kept in the Basilica Museum. The Piazza became a lively hub when the first Basilica was built and the remains of San Marco arrived. A series of fires meant the Basilica had to be rebuilt; the third building dates back to the first century of the first millennium.

The Piazza was a place for trials, tournaments, fairs and markets. In 700 Carnival and coffee made their entrance into the city. When the basin facing the Basilica was filled in and Palazzo Ducale was built (a government building and prison), the Piazzetta was born.

A masterpiece of Gothic Art, Palazzo Ducale graciously combines architectural features from different periods. Three periods of construction can be identified: the oldest, rebuilt from 1340; the reconstruction of 1424; and the Renaissance rebuilding between 1483 and 1565. Today the Palazzo houses the Palazzo Ducale Civic Museum, part of the Foundation of Civic Museums of Venice.

A view of bridges and canals reveals itself to visitors arriving in Venice. The largest waterway in the city, the Grand Canal, is framed by the magnificent palaces built by the Venetian aristocracy.

Having crumbled and been rebuilt several times, the Rialto Bridge crosses the Grand Canal. The bridge is named after a drawbridge, which once enabled ships carrying trees to enter the city. The Rialto Bridge is in the shopping district of Venice, where countless shops sell various objects.

The Bridge of Sighs connects Palazzo Ducale to the Prigioni Nuove. The bridge is named after a legend: prisoners were said to let out a sigh as they crossed the bridge, leaving their freedom behind.

Large ships arriving in Venice pass through the expanse of water known as the Giudecca Canal. From its banks you can see Santissimo Redentore Church, designed by Andrea Palladio and Renaissance church Le Zitelle, which is part of a monumental complex which used to house a hospice for young women without a dowry. The Redentore Festival takes place in the month of July and culminates in a colourful explosion of fireworks at the end of the canal.

Listing all the art Venice has to offer is a difficult task. Immerge yourself in the magical atmosphere of the city and discover calli, campielli and bridges that will transport you back to a different time. Experiencing Carnival in February, renowned throughout world, means rediscovering people, customs, traditions and historic events that contributed towards making Venice unique. Historic processions on the water, rowing parades, processions of floats and the “masks” on display throughout the city honour its beauty.

There is a wealth of local craftsmanship on offer. Excellent lace is worked on Burano Island: the island is named after the “Bora wind” which often blows there. Murano Island is famous for its exquisite works in blown glass. Venetian-Byzantium style Basilica dei Santi Donato e Maria and Palazzo Giustiniani are worth a visit.

The Film Festival in September and the Biennale with its art events mirror the vibrant cultural life of the city.